Why is this school still open? Children choked, kicked, put in shackles at a Port St. Lucie School 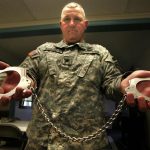 Several parents have removed their children from Victory Forge Military Academy in the wake of a student’s claims that he was physically abused at the private military school in early April.

In Florida, anyone can operate a private school.

The system is allowing for people like Alan and Molly  Weierman to operate the Southeastern Military Academy (SEMA) in Port St. Lucie.

Austin says he was getting his hair cut when his teacher started punching him in the head.

The school, which had only 12 students last year, has been investigated by the Department of Children and Families for 48 child abuse allegations since 1994. DCF found evidence of cruel and unusual punishment of children such as choking to unconsciousness, punching, and kicking.

Fifteen-year-old Austin Griffin is the most recent example.

Austin and his two younger brothers were attending SEMA from 2015 until Austin says he was abused on April 19, 2018.

The school promises on its website it’s “among the best schools in the world.”

A private, Christian-based military school with the mission to focus on behavioral or educational issues and teach self-confidence and self-discipline. Austin’s mom, Tanya Clayton, was sold.

“Austin did struggle academically before that and I expected him to be able to get caught up,” Clayton said.

But Austin quickly realized this school was not what he and his mother thought it was.

“The colonel, Alan Weierman, brought the shackles out one day,” Austin said.

Austin said the colonel explained that the shackles are put on kids if they run away.

But it didn’t end there. Austin said the teachers were violent towards students.

“Major says ‘shut up’ and kicks (another student) in the side of his face,” Austin said.

One method of punishment is forcing the kids to eat a bowl of “stuff,” which Austin explains is a bowl of vinegar, frozen vegetables and cayenne pepper. If students misbehave, “stuff” is replacing all their meals, Austin said.

Board president and school leader Col. Alan Weierman shows the shackles that the school uses on students.

“From the beginning they tell the parents that your kids are going to lie to you,” Clayton said.

And then she said Austin started coming home with bruises.

Clayton decided that this would be the last year her kids would attend SEMA.

“I told my boys just keep your head down, keep your mouth shut. Let’s make it to the end of the school year,” Clayton said. “And then April 19 happened.”Austin said he was getting his hair cut when he smiled at something his teacher Lt. Gary Looney said. “He says ‘Oh you think that’s funny?’ He’s rushing over with closed fists. And all I’m doing is saying ‘please sir, do not do this,'” Austin said. “Lt. Looney starts punching me multiple times in the head. At this time, I have my face covered with my arms, and I’m just taking it, the shots, non-stop. And I hear chairs flying.”

Austin ran to a store down the street and asked for help.

“I was uncontrollably shaking. I could barely press the numbers on the phone,” Austin said. “I was scared, not only for myself but for my brothers. I was terrified that if I went back that I would be hurt even more, if not killed.”

‘I was scared, not only for myself but for my brothers. I was terrified that if I went back that I would be hurt even more, if not killed.’

His mom went to pick him up from the store where he had called for help.

“I was numb,” Clayton said. “I was shaking. I was trying to remain calm for Austin. And then he started repeating: ‘Go get the boys. Please go get the boys.'”

At the hospital, doctors said Austin had a head injury, cervical strain, and back contusion.

Port St. Lucie Police investigated and found probable cause to press charges against teachers Jonathan Weierman and Gary Looney, but the State Attorney declined to prosecute, saying it was difficult in cases such as this to “draw the line between prohibited child abuse and reasonable discipline of a child.”

Efforts to reach Gary Looney were unsuccessful. After the publication of this story, Looney contacted WPTV denying the allegations. He declined an interview request.

Austin isn’t the only one with these stories.

“My son didn’t come to school with those (bruises), he came home with those,” said another mom of a former SEMA student, who wanted to stay anonymous because she fears retaliation by the teachers.

A week before Austin says he was punched, she said her son was abused as well.

“They would constantly call him names and call him stupid,” the mother said.

She recalled an incident with one of the teachers, Jonathan Weierman.

“Jonathan grabbed my son by his arm and was dragging him across the yard,” the mom said. “And I’m yelling at him ‘Let go of my son’ and he wouldn’t let go.”

She said prior to that incident she never really believed her son’s stories because the school told her that kids make up stories.

“I’m sad,” she said under tears. “I’m sad that I didn’t recognize this before.”

DCF investigated the case a month after the alleged incident occurred and said “although the child had no injuries, due to the dangerous nature of the staff’s actions as well as the school’s egregious conduct involving abuse, this case will be closed out not substantiated for physical abuse.”

We asked DCF how many complaints have come forward against SEMA, which had just 12 students last year.

Of the 28 reports Contact 5 was able to review, 16 had substantiated findings.

2005: A staff member punched a student in the mouth and kneed him in the chest

The list goes on and on and on. (READ THE FULL REPORT HERE)

DCF investigators concluded in their 2008 report that the risk to the remaining children at the school was “high.”

Since then DCF has investigated nine more cases, as recent as 2018.

Officials with DCF refused to give out details of those cases, stating that state laws prevents them from providing that information.