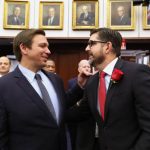 Act now! This is our last chance to tell the Senate no on these massive charter and voucher expansions!

Your letter will be sent to each member of the Florida Senate: