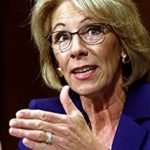 In “No Progress” Seen in Reading or Math on Nation’s Report Card, published in EdWeek on October 30, 2019, Sarah D. Sparks reports significant drops in math and reading performance across the nation. US DOE Secretary rattles her sabers warning that “this country is in a student achievement crisis, and over the past decade it has continued to worsen, especially for our most vulnerable students.”
Reality check: Isn’t this really a scathing indictment of the past 20 years? Isn’t it time that we acknowledge that these 2019 NAEP scores represent an abject failure of the entire high stakes accountability scheme which clearly does not address equity or the incontrovertible moral obligation public schools have to reach and value every single child. Instead, DeVos and the rest double down to preserve their flawed, profitable status quo, blaming students and teachers every step of the way. And never, ever forget, mandatory third grade retention produces that fourth grade “bump” that everyone crows about every single year. Think about that. School “reformers” standing on the shoulders of little retained third graders so they can claim a 4th grade “victory.”
From “No Progress” Seen in Reading or Math on Nation’s Report Card:

The latest results of the tests known as the Nation’s Report Card offer a mostly grim view of academic progress in U.S. schools.

“Over the past decade, there has been no progress in either mathematics or reading performance, and the lowest-performing students are doing worse,” said Peggy Carr, the associate commissioner of the National Center for Education Statistics, which administers the NAEP. “In fact, over the long term in reading, the lowest-performing students—those readers who struggle the most—have made no progress from the first NAEP administration almost 30 years ago.”

Since 2017, reading performance has dropped significantly across grades 4 and 8, with math performance mixed, based on results of the 2019 National Assessment of Educational Progress released Wednesday. Some racial achievement gaps closed—in part because of falling scores among white students—and gaps between struggling and high-achieving students continued to widen.

Nationwide, students’ reading performance fell by 4 scale-score points, to 263, in 8th grade, and by 2 scale points, to 220, in 4th grade, on a 500-point scale. The top-performing 10 percent of 4th graders were the only group to hold steady in reading; all other students performed worse, and the lowest-performing 10 percent of students declined the most. In grade 8, students of every performance decile performed worse in 2019 than 2017.

In reading, Mississippi was the only state to improve in 2019 in 4th grade and Washington, D.C. (as a state) was the only one to improve in 8th grade. (The District of Columbia, in fact, showed the fastest gains this year of any state or large school district.)

In math, students were more likely to hold their ground or improve: 4th graders scored on average 241 on a 500-point scale in 2019, 1 scale point higher than in 2017, while 8th graders performed 282 in the subject, 1 point lower than the last test administration. There was no change in the percentage of 4th or 8th graders who scored at or above the proficient benchmark in math, though 1 percentage point more 4th graders scored at the advanced level in 2019.

“States, districts and schools across America have worked hard over the last decade to raise the bar in classrooms with higher quality standards and aligned assessments to help all students succeed,” said Carissa Moffat Miller, executive director of the Council of Chief State School Officers, in a statement.

CCSSO was “encouraged” by growth in 4th-grade math, Miller said, but later added, “Students nationally are performing better in reading and math today than in the early 1990s, though reading is clearly not increasing at the rate we would hope and this deserves special attention. We recognize the urgency of improving outcomes for all students.” The group pledged to gather a summit of state chiefs, educators, and national experts to discuss how to improve literacy.

Students of different racial and ethnic groups mostly held their ground in math, save that Native American 8th graders declined and Hispanic 4th graders improved from 2017. By contrast, white and black 4th graders students lost ground in reading in 2019, and only Asian students maintained their reading performance in 8th grade. White, black, Hispanic, Native American, and multiracial 8th graders all performed worse in 2019 than in 2017.

“Every American family needs to open The Nation’s Report Card this year and think about what it means for their child and for our country’s future,” said U.S. Education Secretary Betsy DeVos. “The results are, frankly, devastating. This country is in a student achievement crisis, and over the past decade it has continued to worsen, especially for our most vulnerable students.”

DeVos called the results a “wakeup call,” arguing, “We can neither excuse them away nor simply throw more money at the problem.”

Instead, DeVos seems to be doubling down on expanding school choice. She pledged a “transformational plan” by the administration to help students “escape failing schools.”

However, NCES found that in more than half of states and systems tested in math, 6 percent to 14 percent of students had teachers who reported “serious problems” with inadequate classroom supplies.

The 2019 NAEP included 300,000 4th graders and 290,000 8th graders across all states, the Department of Defense schools, and the District of Columbia. The assessment also includes representative samples of students in 27 large urban school districts. For more on how to dig into NAEP data, see this explainer on avoiding “misNAEPery.”

In the longer term, NCES finds the top 10 percent highest performing students improved in both grades and both subjects in the past decade. By contrast, the most struggling 10 percent of students performed worse during the same time.

The 2019 results do not show why performance continues to split, but a separate August analysis of 2015 NAEP results may provide a hint. NCES researchers found teachers of low-performing students in reading, math, and science that year were significantly less likely than their peers teaching high-performing students to report that they engaged their classes in higher-order thinking or offered students advanced work.

For example, 8th graders who scored below basic, the lowest proficiency level in reading, were more likely to have teachers who always or almost always asked students to summarize reading passages to improve comprehension skills, and less likely to ask students to analyze characters’ motivations or identify themes within the texts. For students who performed at proficient or advanced reading levels, that pattern was reversed.

And a separate report out this week suggests another possible cause of the decline in reading performance. The nonprofit Common Sense Media’s census of media use among children ages 8 to 17 found fewer children in that age group are developing a habit of reading. Only about 40 percent of 8- to 12-year-olds said they enjoyed reading “a lot,” and more than one- third of them say they read daily. By the teen years, only 22 percent reported reading every day, and fewer than 1 in 4 reported really enjoying reading.

The 27 large districts participating in NAEP’s Trial Urban District Assessment—who altogether represent more than half of all U.S. students in grades 4 and 8–provide one clear bright spot in this year’s findings. The TUDA districts continue to improve significantly faster than the nation. On average, the districts improved 5 scale points in 4th grade math and 4 points in 8th grade. In reading, they held steady in 4th grade and improved by 1 scale point in 8th grade.

Even in reading, the large urban districts’ performance declined since 2017 by the same or fewer scale points than the national average in 4th and 8th grades. Since TUDA first started nearly two decades ago, the large districts halved the gaps between their students’ math and reading performances and the national averages, though they remain 5 to 8 scale points below the average in those subjects.

“We still have more to do, but the era of poor performance in our nation’s urban public schools has ended, and it has been replaced by results, accountability, and promise,” said Michael Casserly, the executive director of the Council of the Great City Schools, a group that represents the nation’s largest school districts.