By now, many know that Florida Speaker Richard Corcoran bitterly lectured newly installed house members regarding his contempt for the teachers union, 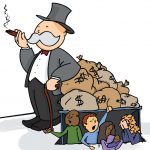 Why is Speaker Corcoran so angry about this lawsuit?

For starters, if the court rules in FEA’s favor, striking down Florida’s voucher program, it will be very difficult for reformers in this state to convert the current corporate tax credit scheme to the much broader next generation Choice 2.0 Education Savings Accounts (ESA). The problem is that BOTH programs rely on diverting potential tax revenues to a third party, allowing reformers to claim that the money never “technically” belonged to the state.

Currently, Florida’s voucher program allows corporations to divert their taxes to Step Up for Students, the state’s largest designated Scholarship Funding Organization (SFO). The resulting vouchers are then used primarily for private religious schools that do not have to meet any of the standards required by the state of public schools. Since its inception in 2001, lawmakers have expanded Florida’s voucher program so that $2.7 billion dollars once destined for state general revenue that should have funded a wide range of needs has been diverted to private schools. Keep in mind that Step Up for Students has been paid at least 3% of the gross or $81 million dollars over the years as a “fee.”

Education “reform” is all about chaos and disruption. Because it’s hard to tear down a cornerstone asset like public education, reformers rely on issuing a series of unfounded “studies” in the hopes that the press and politicians will quote their theoretical “findings” as fact. That strategy, called “moving the Overton window,” manipulates public perception with the goal of normalizing radical policy ideas like annually transferring $800 billion public tax dollars into privatizing public schools.

One such study by Matthew Ladner, is entitled The Way of the Future: Education Savings Accounts for Every American Family. Ladner works for Jeb’s Foundation for Excellence in Education, writes the K-12 Education Report Card for the American Legislative Exchange Council (ALEC) and is a fellow at the Friedman Foundation for School Choice/Ed Choice and the Goldwater Institute. Don’t dismiss this study because it was written in 2012. Its contents are a road map that should not be ignored. Of course, ALEC conveniently provides legislators with an off-the-shelf model bill called the Education Savings Account Act.

Ladner writes that, “Education Savings Accounts bring Milton Friedman’s original school voucher idea into the 21st century.” He lays out all the usual reasons for why, in his opinion, public schools are failing. He claims that public education is a 20th century “factory” model. In reality, what could be more factory-like than “reform” standards such as high stakes testing, virtual learning and student data obsession?

Of course, Ladner blames teachers unions and school boards while ignoring the trauma of poverty and hostile legislation. On one hand he extols parental “choice,” on the other hand he decries the locally elected voice of school boards as “monopolies.”

Camel’s nose under the tent

School reformers have been busy. Since 2014, Arizona, Nevada, Florida, Mississippi and Tennessee have adopted ESA programs.  The easiest first step is to write legislation that covers ESE students. That’s the so-called “nose under the tent.”  Once that happens the door is open for states to pursue Education Savings Accounts for every child while launching a wholesale conversion of existing voucher programs.

Zero proof exists that ESAs are better than public schools

There is an assumption that handing tax funded Education Savings Accounts over to parents will transform them into discerning consumers and thereby “providers will have powerful incentives to compete on the basis of both quality and cost.” That’s the thinking that destroyed thousands of healthy mom and pop businesses across the nation and left us with Walmart. Put another way, should we allow our children to be used as guinea pigs to prove whether consumers control the market or the market controls consumers?

One thing is clear, voters, teachers, parents and children have been gamed by high stakes test and punish reforms. The past 15 years of notions such as “failure factories,” “ineffective teachers,” “status quo,” “merit pay,” “Common Core,” “mandatory third grade retention” and “choice” are the semantics of a scheme. All the high stakes discomfort, micromanagement, cruelty and humiliation vectored toward teachers and children were never about improving or investing in public education. If it were, why would Matthew Ladner write this?

“The job of a private school, private tutor, or community college accepting funds from an ESA is decidedly not to teach the state K-12 academic standards. Rather, people should understand ESAs as an opt-out of the public school system, not as an extension of it into other delivery methods. The hope of an ESA system would be to allow a broad diversity of approaches. We should view dictating a single set of curriculum as a self-defeating anathema to such a project.

The public does have an interest in the academic progress of students in such a system nonetheless. Requiring students to take a national normed exam would serve the needs of transparency in a fashion that does not dictate curriculum to providers or students.” The Way of the Future: Education Savings Accounts for Every American Family

Where’s the truth? In Florida and other “reform” states, Jeb Bush, legislators, lobbyists, education commissioners have all supported state tests, vehemently rejecting any substitution or use of a nationally norm-referenced test, citing the incongruity with state standards. What about Pearson, AIR and all those vendors with their expensive data-manipulated criterion referenced tests, prep and remediation that cost taxpayers billions?

School reformers dislike the fact that the U.S. Constitution is clear about the separation of church and state and that most states have a “no-aid’ or Blaine amendment prohibiting states from using tax dollars to fund religious schools.  An analysis by the National Education Policy Center of Ladner’s “Way of the Future” points out that:

This is the same type of work-around Florida uses to divert dollars to Step Up for Students Corporate Tax Credit vouchers.

Ladner himself writes, “Relative to a voucher program, a system of parent-managed accounts may have constitutional advantages over school vouchers. The broader possible use of funds may help to immunize choice programs from court challenges under “Blaine Amendments” in some state constitutions.”

Privatizing public education is corporate welfare on steroids. These “reformers” don’t really care about kids, quality or accountability. They simply can’t get wait to get their hands on the $800 billion dollars states spend annually on public schools.

ESAs require a shift to private schools and a rejection of public education. Here’s what they do:

Perhaps the most striking problem on the list above is the amazing opportunity ESAs have for inequity. Obviously private schools reserve the right to raise their tuition, discriminate and teach whatever they want as long as consumers buy. Reformer’s can’t have it both ways. They can’t claim to be concerned about zip codes keeping  poor students “stuck” in schools while pushing publicly funded ESAs designed to allow Johnny’s parents to pay and extra $20,000 per year for an exclusive prep school when Ricky’s parents cannot.

As an analysis by the National Education Policy Center of Ladner’s “Way of the Future” points out:

”Research evidence from the United States and abroad suggests that parental choice policies, such as ESAs, result in increased social, economic, and racial stratification. This poses a fundamental equity issue for the provision of universal education in a democratic society.”

Predictably, ESAs were front and center at Jeb’s recent Foundation for Excellence in Education National Summit where there was talk of schooling in a “post facility” world and “education savings accounts (ESAs), voucher-like subsidies that can fund not just private school tuition, but also things like tutoring and home schooling.”

Writer Rachel Cohen, who attended the summit observed: “In theory, additional money to pay for educational expenses sounds like a great way to level the playing field between well-off and low-income students. Children from wealthy families take advantage of all sorts of costly educational opportunities outside of school, such as summer enrichment programs, sports teams, and private tutoring. But at least as they’re currently conceived, education savings accounts are more about redirecting existing per-pupil funds away from public schools, not so much about supplementing public school students with additional money.”

Speaker Corcoran’s anger over the voucher lawsuit betrays his motives. Years of legislators passing “reforms” that hurt children and harm their teachers speaks volumes. Without the ability to divert funds, it will be very hard to enact Milton Friedman’s sixty-year-old free-market voucher/ESA vision that devotees like proposed U.S. Secretary of Education Betsy DeVos, Jeb’s Foundations and the James Madison Institute want so badly.

Of course DeVos, an ardent voucher/ESA fan, has invested heavily in her effort to undermine public schools. The Washington Post reports, “And in 2000, the DeVos extended family spent $5.6 million on an unsuccessful campaign to amend Michigan’s constitution to allow school vouchers — the only choice tool not currently in play in Michigan.”

Make no mistake, the political school “reform” agenda intends to destroy public schools. They’ve talked about it, they’ve written about it, they’re passing a suite of laws to do it.

Maya Angelou famously said, “When someone shows you who they are, believe them.”

Now would be the worst possible time for public education advocates to back down from this fight. These are our children and they desperately need us to be their voice.