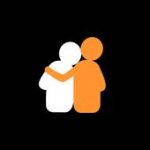 The concrete courtyard at Boca Raton Community High stretches the length of a football field. When the bell rings for lunch, a flurry of students pack it from every direction.

Almost 3,400 students go to school here. Students say the place is so populated they can go years without seeing the same student twice.

It’s easy to go unnoticed. And intimidating if you’re new, struggle with self-esteem or the English language.

“Coming here, not knowing anyone, took a toll on my confidence. I became socially awkward. I sat by myself,” said Allie Sealy, a 16-year-old junior.

Sealy’s family moved from Broward County her freshman year so she could go to Boca Raton High. Two years later, she and three other students started a group so that no one else would have to eat alone.

They call it “We Dine Together” and it’s built on the idea that all good relationships start around a table.

They gather on Tuesdays to eat pizza, share poetry, talk politics, play games and plan community service hours. More than 60 students have joined since the beginning of the school year. Some used to eat alone with no one to call a friend. Others were outgoing and wanted to join the mission.

When they’re not meeting, they’re out in the school’s busy courtyard searching for students who are by themselves.

“No kid should eat alone,” said Denis Estimon, one of the club’s leaders. “There are so many problems in this world and the only thing that can solve it is relationships.”

Estimon and his teacher Jordan Hernandez said the need for the club has gotten greater after the election. Social cliques have turned even more inward, and some immigrant students now hear from others that they should get deported or go home, Estimon said.

Studies show the harmfulness of isolation in adolescence and early adulthood.

During adolescence, kids form a sense of identity based on the social networks they share with their peers as they distance themselves from their parents, said Robin Vallacher, a Florida Atlantic University psychology professor.

A sense of belonging, he said, “is right up there with food in terms of basic need.”

Psychologist Abraham Maslow wrote in the 1940s that humans first need food and water, then security and then belonging before they can achieve self-esteem and purpose.

Our desire to feel like we belong is so strong, particularly during adolescence, that we may take any invite to fill the need. Hence, gangs and terrorism groups target isolated kids, Vallacher said.

Andy Pham, an assistant professor of school psychology at Florida International University, said his research found that students who were isolated were more likely to experience difficulties in emotional well-being and school work.

Estimon got the idea to launch We Dine Together this summer while taking classes at Propel, a non-profit that helps disadvantaged youth get ahead in school. He had lamented the divisions in the lunch room.

“One side is the free lunch kids, the (kids with disabilities). The other side would be the student leadership, the kids that have money,” he said.

Most of the kids at Boca are white and come from financially stable families. But there are minorities with some 70 countries represented here, according to principal Susie King.

Seldom do the differing ethnic or racial groups mingle, so you end up with a variety of students who aren’t sure where they fit in, or are afraid to try. That’s exascerbated by the sheer size of the population, which makes it difficult to run into friendly faces if you don’t try, Estimon said.

The non-profit’s director, Gregg Francis, challenged him to do something about it.

So Estimon, Sealy and two other friends started inviting everyone they knew to join them in pursuit of ending eating alone. They passed out flyers, shook hands with the quiet kids, connected with the outgoing kids.

“I see coming together in one room Latinos, black, white, some students that are Irish, Haitian students — all over the map. They have one common goal and it’s to make friends and understand each other,” said teacher Hernandez. “They bridge this chasm between students. It’s not just about eating pizza together but how we do life with one another.”

Estimon hopes to launch a non-profit after he graduates to expand the concept to other schools. He and founders Jean Max Meradieu and Kinsley Florestal see themselves in the students they’re trying to help.

They moved to South Florida from Haiti in elementary school. They spoke little English at first. And sat alone at lunch time.

“Everybody else was laughing and having a good time, and I stood there, just watching. It was depressing,” Meradieu said. “I always understood I had to go to school, but I didn’t want to go to school because I was so isolated from everybody.”

And Estimon recalled, “I remember sometimes at school that I didn’t even know how to ask the teacher if I could use the bathroom, so I’d hold it.”

They acknowledge their mission is ambitious. But they’re not leaving it up to chance.

“Someone has to make change,” Florestal said.