Florida’s Best & Brightest teacher bonus is so prejudicial that Sen.Nancy Detert called it “stupid.”  It’s emblematic of the “done-deal” broken contract between politicians and the people who vote for them. 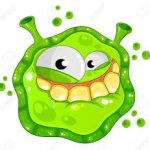 Brightest has cost taxpayers $93 million dollars to pay teachers $10,000 for their teenage SAT scores. It’s telling that even when one party far out-numbers the other, there still were not enough votes in 2016 to pass the Best & Brightest in the Florida Senate. So, leadership told its Appropriations Chair, Sen. Tom Lee, (running unopposed in District 20), to put Best & Brightest in the budget for the second year in a row, robbing voters of transparency and due process.

Termed-out Sen. John Legg, no stranger to manipulated outcomes, recalled an exchange with Sen. Lee for TBO,com,  “Tom and I went at each other on the floor,” Legg says. “Tom, why are we doing this?” Because presiding officers matter, came the reply. “He said, ‘So I decided to put it in the implementing bill, too bad.’ ” In short, the fix was always in.

Policies that defy logic are nothing new.  They are meant to distract the public or cause a political rift.  At a recent workshop when Board of Education member John Padget  called the program into question by saying that lawmakers should “find better use for the money”  it was lip-service. For two years the Florida Department of Education has defended the Best & Brightest as if it were a legitimate policy. The Florida Department of Education lauds the program as an awesome “recruitment tool”  to help lure teachers from other states to public schools in the Sunshine State.

Judy Lindquist, who teaches at Andover Elementary in East Orange, earned a “highly effective” rating from the district. She also is on the state education department’s list of “high impact” teachers, meaning she has helped her students make strong academic gains three years in a row. But her scores on the SAT, which she took in 1976, were too low to qualify her for the bonus. In her view, it is “ludicrous” that her performance on a test she took in high school trumps her success in the classroom. “What kind of incentive program is that?” she said.

Or consider this, in a state whose constitution stresses equity:

The bonuses have highlighted a long-standing problem: That Florida’s best teachers are often not in the classrooms that most need them. The bonuses also have failed to help with what state educators say is a long-standing goal of equally distributing “excellent educators…There was one bonus-winning teacher for every 954 students in a high-poverty Florida school this year, the analysis determined. By comparison, schools with students from more affluent homes have one “best and brightest” teacher for every 398 students.

Unsurprisingly, the Miami Herald reports that incoming Florida House speaker Richard Corcoran has made no secret of his desire to grow the state’s Best and Brightest teacher bonus program, which he 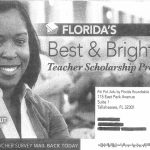 helped shepherd into the state budget for a second straight year. Corcoran even paid for a direct mailer through his well-funded Florida Round Table PAC seeking suggestions from teachers for ways to make Best & Brightest “better” instead of meeting with them in person. Corcoran thinks “a mailer would be the least intrusive way to start this conversation.”

It’s not hard to get the picture for 2017, with Lee in the Senate and Speaker Corcoran in the House. Forget logic, Florida is stuck with the Best & Brightest. No one can prove that teenage test scores make better or brighter teachers. However, there’s plenty of proof that the program is unfair to “highly effective” veteran teachers and those who never took the tests.

Finally, there’s this from the 2015 citizen-driven advocacy fight to stop Best & Brightest:

Sponsor Rep.  Fresen, who insists that the Best & Brightest will attract smart new teachers, is blind to the fact that ACT/SAT scores are not a predictor of professional success. ACT executive, Wayne Camera, told the Tampa Bay Times, “In our view, there would seem to be other measures of academic performance, more recent than ACT scores, which would better reflect teachers’ skills and competency.”

Back in the day, before Ed Reform took root, Florida paid around $10,000 to teachers who passed the rigorous National Board Certification. The state’s pro-education reform politicians stopped funding that incentive when education policy lobbyists, including former Gov. Jeb Bush, decided Board certification was too costly and does not impact student success.

Even more important, Universities such as prestigious Georgetown are no longer requiring ACT or SAT scores for admission.  A growing list of 180 universities has made these tests optional.  They believe a student’s academic record is a much more reliable indicator of success than a single test such as ACT or SAT.  Can’t the same be said about teachers?

Not only do Florida politicians disrespect the will of the voters, they work to undermine each other.  They are happy to promote nonsense initiatives and look foolish doing so as long as it checks off a box on their political agenda. Leadership in the Florida House and Senate tell rank and file members which bills to sponsor and how to vote on the daily.

They know expanding the maligned Best & Brightest teacher bonus has struck a chord. For education “reform” politicians it means no insult is too base, if teachers can be made to pay the price. For public education advocates it means that using teenage test scores, which are poor performance predictors, to reward some teachers and devalue others hurts us all, especially our children.

Note: A portion of this piece was published in the Orlando Sentinel as part of the Central Florida 100