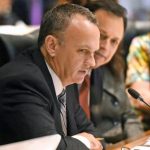 Florida’s 2.8 million public school children need your help now. Both the Budget and HB 7069, the Conforming bill, which contains an inappropriate number of policies and barely vetted concepts, will face an up/down vote in both the House and the Senate Monday afternoon. Take action now!

Speaker Corcoran promised transparency, but delivered the opposite when he made the choice, along with Senate President Negron to negotiate the entire budget shrouded in in secrecy.

HB 7069 is a massive 278 page train bill loaded with sweet legislator “projects” and positives such as recess to entice the passage of perhaps the worst list of education policies in recent memory.

Take action now. Tell the Senate to VOTE NO! Both HB 7069 and the Budget are morally indefensible.

The stakes are higher than ever:

It doesn’t have to be this way.  Florida has the money. Legislators are choosing to give it away as corporate Charter welfare in exchange for special consideration such as campaign donations.

Send your letters now!  Call and Tweet your legislators. Tell them you strongly object to cutting public education while granting corporate welfare cash to charter chains.

This 2017 session will go down in history as a coordinated effort to fund school privatization while turning a cold shoulder to Florida’s three million public school children.

Asking for Governor Scott’s veto is our next step.