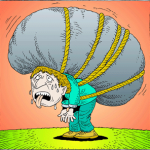 The 2020 Florida Legislative session will be extended to at least March 18th mostly because it’s at impasse over the K-12 budget.

Sadly, the Budget Conference led by Rep. Travis Cummings and Sen. Rob Bradley, cannot agree on starting teacher pay, how much to add to the Base Student Allocation or whether veteran teachers should have an increase in salary.

The backdrop to this debate is a looming problem so huge, It’s like a herd of elephants in the living room. Curiously, neither the House nor the Senate seem the least bit concerned.

“It” is the untenable $232 Million shortfall to The Florida Retirement System (FRS) stemming from the Great 2008 Recession. Somehow, state legislators expect districts to “find” millions of extra dollars to cover this cost as mandated in the recently passed HB 5007.

The FRS is the retirement fund for teachers, state workers, police, fire and other public sectors. Currently, teachers pay 3% of their salaries and districts pay 8% of each teacher’s salary annually into the same FRS pot. HB5007 requires districts to fund an estimated additional $72/student to cover the FRS shortfall.

This massive FRS cost will cause school districts extreme financial pain which will trickle down to the children and their classrooms. Any extra funds legislators attach to the Base Student Allocation, now only expected to increase somewhere between $18 and $50 per student, will be devoured by this debt.

There is a solution. Florida Legislators, who love to tell districts to raid their own reserve funds (which they must maintain for bond ratings to build schools), are sitting on $5.5 billion dollars in reserves. This far exceeds what the state is required to keep for their own bond rating.

Florida could comfortably cover the entire $232 Million FRS shortfall, sparing districts the agonizing choice of which classes to cut, which personnel to fire, which wrap around services to stop.

It’s disappointing, but the DeSantis “Year of the Teacher” boils down to no clear path to veteran teacher raises and every district hit with millions in unfunded FRS liability.  Even the Governor’s “must-have” minimum teacher pay is a mystery number still to be revealed in the Appropriations Act.

Why on earth is this acceptable when the same lawmakers who starve public teachers and schools are spending hundreds of millions on a sweeping expansion of the Family Empowerment Scholarship/Voucher & unnecessary corporate tax cuts?

Of course, legislators will cry that COVID-19 is causing the markets to plummet, the state’s reserves to lose money making it impossible for them to help districts now.

Florida Public Education is in financial crisis. It’s hard to remember when our public schools were Florida’s top priority. Even an exasperated Sen. Tom Lee said, “With a Legislature that spends 80% of its time focusing on 20% of the students, we might as well name our education committee the committee on charter schools and vouchers.”

This is the exact moment when Florida Legislators should step in and help districts cover the FRS debt ignored by state since 2008.  The state can either force school districts into a Sophie’s Choice of covering this $232 million and deciding which programs, staff or services our children can do without or legislators can own their role in this financial crisis and step up to cover the shortfall.

As for COVID-19, the Trump Administration has set aside $8.3 billion dollars for states to offset the financial burden of the virus. Florida will receive $27 million shortly for that purpose. So, legislators can’t really complain about using reserves to pay for the FRS shortfall. After everything these elected public servants in the House and Senate have not done for Florida Public Education, it’s the very least they should do.