Take Action: NO on HB 7123 Forcing districts to share referendum $ with Charters 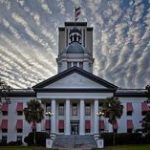 Take action and contact your Representative today.  HB 7123, forces districts to share local voter-approved referendum dollars for operational  purposes (not capital outlay) with corporate charters passed out of Appropriations yesterday and heads to the House floor for a vote. Remember:  Charter schools are funded with public money and run by private for-profit corporations.

Take Action, call, write, and tweet your  representative today. Tell them to vote NO on HB7123

HB 7163 robs voters of Home Rule at the local level:

Rep. Carlos Guillermo Smith, D-Orlando, pointed to Palm Beach County, where voters approved a property tax hike after the school board stated that the money would not be shared with charter schools. That decision is now the subject of a lawsuit.

“We’re coming in and usurping will of the voters … but they approved it overwhelmingly on that condition,” he said. “How can we be doing this?”

Take Action today. Call, write, and tweet your  representative today. Tell them WE EXPECT A NO VOTE on HB7123

Florida government belongs to us. Used to be both sides of the aisle respected and supported our right to Home Rule. Now the agenda of single party dominance is threatening everyone. If we don’t reverse this, its on us.

Your district referendum money is at risk TODAY because of HB7123: