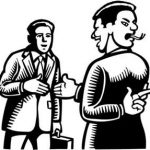 Words have power. The advertising industry is built on finding out which words sell. Most of us accept that the principle of caveat emptor places the burden on buyers to beware. But what about the darker, politically-driven purpose of using words in calculating ways to damage or alter perceptions? Take public education, for example. There is a significant national effort underway by “reformers” urging people to re-style the delivery system of the American Dream as “government schools.”

The New York Times reports that Kansas politicians now use “government schools” to deliberately ridicule their statewide system of publicly funded education.  Jeb Bush famously refers to public education, school boards and districts as “13,000 government-run monopolies run by unions.”  That’s strange coming from a guy who burned through $80 million in PAC dollars in his quest to be elected head of our “government.”

Sadly, this is about money and power, not what’s best for our children. It’s a move to set traditional district public schools apart from so-called “public for-profit charter schools.”  States spend $800 billion on public education annually, $19 billion in Florida.  Ever since the unsecured loan/credit default fiasco of 2008, privatizers have been drooling over that evergreen pile of tax payer cash spent on public schools.  They don’t see this money as a shared community investment in our children.  It’s just a glorious pot of gold ripe for private profit, not a public asset that belongs to us.

Every hedge fund has a charter school “investment” opportunity sector.  Wealthy foreigners can buy citizenship for themselves and their families in exchange for investing in charter school development.  The problem is that this money transfer isn’t happening fast enough, meaning the public school systems aren’t dissolving as planned.

It’s not for lack of trying. Politicians, whipped by lobbyists have done their best to ratchet up the misery. In Florida they’ve defunded public schools by $4 billion dollars, used high stakes tests to harm teachers and hurt kids, diverted billions to fund vouchers for private religious schools and aggressively given public school tax dollars to for-profit charter schools that often fail.  Predictably, vendors, former bureaucrats, politicians and lobbyists have grown rich from the enterprise.

Parents baffle reformers by remaining loyal to their district public schools and teachers, choosing instead to advocate for an end to unproven, expensive test and punish policies.  Still, politicians persist in claiming public schools are failures and kids are “stuck.” Thanks to gridlock and partisanship, the term “government” resonates negatively with people.  Ironically, the very legislators who receive tax paid salaries and benefits stridently paint neighborhood public schools as shoddy “government” training centers from which children must be rescued.

This isn’t the first time words have been weaponized to achieve a political goal. In fact, education “reform” is filled with buzzwords like choice, status quo and accountability which are designed, based on individual perceptions, to mean different things to different people.

Take the word choice. “Reformers” say that parents must have “choice” in educating their children. Who would argue with that?  What’s not mentioned is that “choice” means a shift to a factory-like widget in/widget out view of students as workers. They don’t disclose that the same finite pot of money is funding extra “choice” seats for students, seriously diluting public school resources. They don’t tell parents who choose religious school vouchers that their school might not be accredited and is not accountable for their curriculum.  So getting to make a “choice” and being informed are two different things. It’s a gotcha for parents who don’t know to ask the right questions. It’s the sort of mean trick that gets played by hucksters of every stripe and it always ends with, “Sorry, you made your choice!”

There’s no do-over for our kids. The reality is that many of the so-called “reforms” from mandatory retention, excessive standardized tests, school grades, unfair teacher evaluation methods, data obsession and narrowing the path to high school graduation are failed policies that deserve to be reversed as soon as possible.

History is flush with bullies, dictators and worse who screamed into power using words to denigrate anyone who stood in their way. The dishonest label of “government schools” feeds an education “reform” narrative of doom and failure. Our free public schools, which the majority of our nation’s children attend, rank among greatest social institutions ever built. The intentional negative re-branding of public education for political expedience does nothing but advance a profit motive. In a word, that’s unforgivable.

If you like what we do, please help us fund this work.