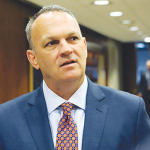 How best to help 77,000 children at perpetually failing K-12 public schools sharply divided the Florida House on Thursday, as the chamber’s Republican majority pushed through a controversial $200 million spending plan to attract specialized, high-performing charter schools to Florida that would offer an alternative to — and potentially supplant the role of — struggling neighborhood schools.

The “schools of hope” proposal (HB 5105) sparked more than three hours of floor debate, mostly by Democrats — the longest of the 2017 session so far. The final vote was 77-40, with Democrats unanimously opposed over concerns the bill would set up a “segregated,” unfair system that would further disadvantage failing schools.

“Are we returning to the days of separate but not equal in 2017? Over-funding charter schools and underfunding public schools is the same thing,” said Rep. Patrick Henry, a black Democrat from Daytona Beach. He called the bill “another nail in the coffin of public education.”

Republican supporters of the measure touted “schools of hope” as a way to help break the cycle of generational poverty in communities that are frequently home to black and Hispanic populations, because they said these specialized charter operators would use innovative techniques that have been proven to work in other places, like New York or Washington, D.C.

Republicans also repeatedly dismissed their Democratic critics as pawns of teachers unions, casting them as implicit supporters of allowing failing schools to remain that way.

“What we’re talking about today is a moral issue,” said Rep. Jason Fischer, R-Jacksonville. “A ‘no’ vote is to continue failure factories. … A ‘no’ vote, in my opinion, does not serve children like we are obligated to do.”

“This is our ‘Hail Mary’ to the kids of Florida to try to give them better opportunity and a better life,” Clearwater Republican Rep. Chris Latvala said.

After the vote, HB 5105 immediately went to the Senate. Lawmakers in that chamber haven’t discussed at all the creation of “schools of hope,” let alone funding the policy with hundreds of millions of dollars. But they’re open to it.

Without a direct companion bill in the Senate, both chambers agreed Thursday to negotiate a compromise in a conference committee of House and Senate members as part of budget negotiations. That all but ensures that some form of the “schools of hope” bill will become law in 2017-18.

Senate pre-K-12 education budget chairman David Simmons, R-Altamonte Springs, told the Herald/Times on Wednesday that the Senate likes the premise of helping students in perpetually failing schools, but senators will have their own ideas on how to do that. He said, unlike the House plan, that could involve more aid to traditional public schools as House Democrats proposed.

The “schools of hope” bill was among three of House Speaker Richard Corcoran’s most-desired and drastic reforms for public K-12 education policy to pass the Florida House on Thursday.

HB 5105 specifically sets up the framework for Florida to attract — through loans and other financial incentives — out-of-state, specialized charter operators that would establish new schools in communities with public schools graded “D” or “F” for three years or more that also receive federal Title I funds. There are 115 schools in 27 counties across Florida — almost half of which are in South Florida and Tampa Bay alone — that meet that criteria.

The other two measures — a $214 million expansion of the “Best & Brightest” teachers bonuses (HB 7069), and changes to how local and state taxpayer dollars for school construction must be shared among traditional and charter schools (SB 376) — passed largely along party lines but without almost any debate. The Senate agreed to also send those bills to conference negotiations.

The prolonged debate over “schools of hope” quickly grew divisive and partisan, as Democrats and Republicans traded accusations and complaints.

Republicans criticized Democrats for off-topic “talking points,” arguing that they could have tried to improve the bill during two committee hearings and on the House floor, but they offered no formal amendments.

Democrats bemoaned what they described as House leadership’s narrow-mindedness and a lack of bipartisanship in crafting the bill. They also accused Republicans — the party in power in the Florida Legislature for 21 years — of creating a public education system that allowed traditional public schools to collapse into perpetually failing status through Republicans’ emphasis on privately managed charter schools above conventional neighborhood schools.

“This is not a ‘school of hope’ — this is a Band-Aid that has a sore festering underneath,” Miami Gardens Democratic Rep. Barbara Watson said.

As a session priority for Corcoran, R-Land O’Lakes, the legislation was a product of months of work in the House education committees this year, spearheaded by full education chairman Michael Bileca, R-Miami.

The bill includes specific criteria as to which “non-profit” charter operators would be eligible to start a “school of hope.” However, Latvala acknowledged on the House floor Wednesday during a two-hour question-and-answer floor discussion that nothing would prevent those operators from contracting with for-profit management companies or related businesses — a common criticism of the charter school industry. That set-up by some charter operators allows them to financially profit from the taxpayer money they receive to operate public charter schools.

“This bill ain’t nothing but a cash cow for somebody else; it ain’t got nothing to do with the education of these children,” said Rep. Roy Hardemon, a Miami Democrat.

In terms of addressing the struggling neighborhood schools — which would still remain, even if a “school of hope” came to town and offered parents another option — the bill expedites turnaround strategies, so that students don’t languish for years in schools with a failing status.

“There is no overnight success in education,” Rep. Kamia Brown, D-Ocoee, said. “There’s no one here endorsing leaving kids in failing schools, but the change has to be holistic and it has to be real.”

“This bill is about intervention,” countered Rep. Ralph Massullo, R-Lecanto. “There’s no guarantee of hope, but what hope is is a vision of potential for the future. … It’s our duty to try.”

Don’t like what’s going on? Consider the fact that across the board in the House and Senate there is a 3:1 ratio of Republicans to Democrats. Committees often contain 10 Republicans and 5 Democrats. Almost without exception, bills are politically-driven and passed along party lines. The only way to restore balance is to even the playing field in 2018.