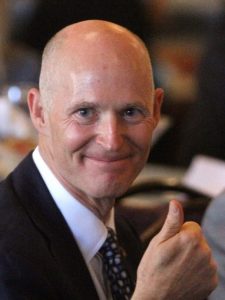 Let’s recap: The current per pupil funding amount of $7,178 is $74 more than the final 2007/08 calculation of $7,142.79.  That’s less than $8 per year for the past nine years. None of this accounts for hundreds of thousands of additional students since 2007. A review of spending on a range of education related items since 2007 reveals a miserly, even stingy funding for ESE, which has gone from over $1 billion in 2007 to $900 million today.  Transportation was $480 million in 2007 and is $430 million today. The list of such examples is proof of Florida’s disrespect toward public education.

When Gov. Scott asks for $1 billion in corporate welfare through tax breaks, he is really asking Florida taxpayers to come up with that money. In the meantime, the fundamental values of the citizens of this state such as high-quality public education, health and safety are put on the back burner. Is it any wonder that Florida often earns Fs and ranks last when it comes to investing in its own people?

This latest study, Is School Funding Fair? America’s Most Fiscally Disadvantaged School Districts from the Education Law Center/Rutgers, which examines 2008-2013, gave Florida an F and placed it near the bottom public education spending.

Florida ranked 42nd for education funding per student and 49th for the number of teachers per 100 students in public schools. The state also shows the second steepest decline in education funding, behind Hawaii, between 2008 to 2013, the years the study measured.

“We don’t know what level of funding is required in Florida, but when you look at what Florida is spending relative to other states, there is a pretty big disparity,” she said.

With all the emphasis placed by Florida politicians on diverting tax dollar to various separate and unequal school “choice” options, the Times Union notes this about private schools in Florida:

“If the point of those voucher programs is to expand options for low-income students, there’s still a pretty big gap, one of the biggest in the country,” Farrie said.

If you like what we  do, please help us

continue to fund this work.