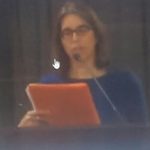 Marie-Claire Leman a Leon County public school parent and Fund Education Now associate testified this week in the Senate Appropriates Committee against SB 48 which converts the state’s five voucher programs into two Education Savings Accounts pre-loaded with designated public-school funds that entitles parents whose children do not attend public school, wide spending flexibility to reconstruct their education piecemeal. This was the final Senate committee stop on the third day of the 2021 session and now its onto the Senate floor for a vote!

Much thanks to Marie-Claire, who is consistently among the few citizen voices present to testify in Tallahassee for Florida’s public school children. Her wise words were quoted in news reports and can be seen on the Florida Channel at 59:94.

“After raising many concerns in the first two committee stops where this bill was heard, I want to focus on two that I think should preoccupy you most as members of the Appropriations committee with a fiduciary duty to all Florida tax payers.

1) The first is fiscal responsibility. I would disagree with Senator Diaz: the financial burden will not be the same. With this bill, we are increasing access to vouchers and ESAs to new students, students who were not already in public schools. And the number of vouchers and ESAs being increased means that new money is going to fund some of these vouchers. In a year where we have heard that cuts will need to be made across the board and to expect them in education, it seems misguided to increase spending by expanding these vouchers. And sometimes we hear that it’s one pot of money and at others time, in order to counter this argument, we hear that there is money being earmarked for the scholarships/vouchers/ESAs. However, those are tax dollars, those are dollars that are being tax-credited, so that is revenue that is not going to the general fund to then fund things like public education.

2) The second concern that I think you should have is with regard to equity. Throughout these committee meetings we have heard from parents who are benefiting from vouchers to send their kids to private schools. Their stories are compelling, their stories are success stories, but they are individual families. Your constitutional responsibility is to all students! Turning over public funds to a private marketplace will not help us achieve equity. The marketplace will not be equitable. Families will get the same amount not according to need. Where Public Education aims to create equity, to be an equalizer, these ESAs create a competitive playing field which inherently creates inequities in access to quality K-12 education.”