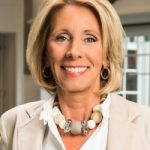 Three years ago, a race for the Volusia County School Board – typically a low-key, low-budget affair – got an unusual infusion of money, including $1,000 from a billionaire in Michigan.

That check was sent by Betsy DeVos, now President Donald Trump‘s nominee for secretary of education, whose appointment will be voted on by a Senate committee Tuesday.

The nomination of DeVos, part-owner of the Orlando Magic with deep political ties to Florida, has sparked a fierce debate, both about her qualifications to oversee the nation’s public education system and her near singular interest in making charter or private schools an option for more students.

The 59-year-old grandmother and Michigan native is the wife of Amway co-founder Richard DeVos’ eldest son, but came to the marriage with her own family’s fortune, from her father’s successful Michigan auto parts company. Forbes puts her portion of the family wealth at $1.25 billion.

For the past two decades, she has devoted herself to school choice. “Traditional public schools are not succeeding,” she told the magazine “Philanthropy” in 2013. “In fact, let’s be clear, in many cases, they are failing.”

She has declined to be interviewed during her pending nomination to the Cabinet.

The money DeVos sent to the Volusia school board candidate back in 2014 was part of an effort to boot an incumbent she viewed as hostile to Florida’s biggest school voucher program, which now pays to send to more than 97,000 children from low-income families to private schools.

The strategy worked. The candidate DeVos backed won. So did another school board candidate she contributed to that year in Indian River County, for the same reason.

DeVos’ contributions to those Florida elections highlight how willing she has been to use money to influence education policy far outside her home state of Michigan.

In fact, Florida politicians are among the biggest recipients of her largesse.

The Sunshine State is second only to Michigan in the number of individual candidates DeVos or her husband wrote checks to during the past five years, according to an Orlando Sentinel analysis of the more than 430 campaign contributions she listed on a form required by the Senate committee considering her nomination.

The list she provided to senators noted $47,000 given to Florida candidates, split about 60-40 for Republicans and Democrats, whom she typically supports if they back the school-choice policies she favors. A check of Florida’s campaign database, though, reveals the figure could be higher. About $3,000 in donations from DeVos or her husband during that period didn’t appear to be included on the list for the Senate committee.

Overall, members of the DeVos family, including Richard DeVos Sr., have donated more than $2 million to Florida candidates for state office and committees since 1996, according to the state database.

DeVos spends some time at a home she owns in Vero Beach and sometimes watches Magic home games from her family’s seats near the team’s bench or from their suite. But she doesn’t have personal relationships with many political players in Central Florida.

But the family’s financial influence — both political and charitable — is significant. They donated $400,000, for example, to the OneOrlando Fund last year after the mass shooting at Pulse nightclub.

For her supporters, most of DeVos’ spending underscores her deep commitment to her key issue: Providing options for students living in poverty who, in her view, are too often trapped in poor-quality public schools.

“Her agenda has always been helping disadvantaged students get into schools that are best for them,” said Patricia Levesque, executive director of the Foundation for Excellence in Education, one of former Gov. Jeb Bush‘s organizations, where DeVos served on the board of directors until her nomination.

“Her compass is pointed in the right direction,” Levesque said.

To critics, all those campaign checks are evidence that DeVos’ credibility in the education arena is based only on her wealth and a sign she’s determined to damage public schools, which educate about 90 percent of American children.

“Her influence lies solely in her ability to buy it,” said Kathleen Oropeza, an Orlando mother who helped found the advocacy group Fund Education Now and opposes DeVos’ efforts to create programs that send public money to private schools.

“Nothing in her career has ever suggested she respects or understands what public education has done for this nation,” Oropeza said.

DeVos has never worked as an educator and never attended public school, said family spokesman John Truscott. Neither did her children.

Her allies say she wants to offer low-income families the kind of choice affluent parents already exercise when they when they buy a home in a certain school zone or pay private tuition.

“There is only one thing that motivates Betsy, and it’s the same thing that has motivated her for the twenty years she has been working in education reform. She wants low-income children to have more choices and more opportunities,” wrote John Kirtley, a Tampa businessman, in an email.

Kirtley was instrumental in starting Florida’s Tax-Credit Scholarship Program, the state’s largest voucher program, when Bush was governor. He has worked with DeVos for years, serving most recently with her on the board of the American Federation of Children, the school-choice organization she led until Trump nominated her in November.

DeVos did not play a role in starting Florida’s current school voucher programs, but worked behind the scenes — and gave money —to help them succeed.

In 2014, for example, lawmakers created an education savings account program, akin to scholarships worth about $10,000 each, for children with certain severe disabilities to use for private educational services, if they weren’t in public school.

The program is now called the Gardiner Scholarship, after former Senate President Andy Gardiner, who championed the cause. Gardiner said he didn’t talk with DeVos about the program.

But Kirtley said “the Gardiner program would not exist without Betsy.” Her family foundation contributed $100,000 to fund needed start-up costs.

Also in 2014, the Florida Education Association, the statewide teachers union, challenged the constitutionality of the Bush-era tax-credit program in court, a fight it recently lost. DeVos’ organization raised money to fight the lawsuit and to defeat school board members who backed that court action.

Diane Smith, the Volusia school board member who lost that year, said she was stunned when her opponent started spending enough to run repeated TV ads.

Soon she realized the spending spree was “retaliation for the lawsuit,” which she supported at the time as president-elect of the Florida School Boards Association.

The country doesn’t need “someone on the national level who has absolutely no education experience whatsoever outside of the fact that she wrote nice checks,” she said.

We need your help!  –  please donate!