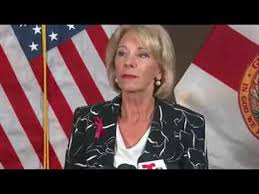 Education Secretary Betsy DeVos made a contentious visit to the site of last month’s Florida school shooting Wednesday, in which she was criticized by survivors and abruptly walked out of her own press conference.

“Do something unexpected: answer our questions,” Aly Sheehy tweeted at DeVos. “You came to our school just for publicity and avoided our questions for the 90 minutes you were actually here. How about you do your job?”

Emma Gonzalez, who captured the world’s attention when she called “BS” on Trump and the National Rifle Association following the school shooting, dismissed DeVos with a tweet to her 1.2 million followers.

When the visit was announced Tuesday evening she wrote it was a “good thing I was already planning on sleeping in that day.”

Student Sarah Chadwick echoed the sentiment in a tweet: “Literally no one asked for this.”

The brutal massacre has forced the issue of gun violence and gun safety laws to the forefront, with student survivors fiercely calling for change and stricter regulations. President Trump has since proposed banning bump stocks and arming school staff.

DeVos, who once advocated for arming teachers so that they might protect themselves from bears, said she would support a program for personnel to be trained to carry firearms.

“Let’s be clear, I think to say ‘arming teachers’ is an over simplification. It isn’t a program that needs to be required or mandated for every community,” she told reporters in a press conference following her visit with Stoneman Douglas students.

She also told reporters she toured the school with student journalists, and vowed to return to sit down with them and further delve into the issues. The editor of the school’s newspaper “The Eagle Eye,” however, said DeVos “refused to even meet/speak with students.”

“I don’t understand the point of her being here,” she tweeted.

And DeVos’ brief appearance at the Parkland high school isn’t the only thing sparking backlash.

When further pressed on the issue of arming school staff, with questions surrounding training standards and student opposition to such a program, DeVos walked away from her podium and ended the press conference.

The Florida Senate earlier this week passed a provision that allows for school personnel to become certified law enforcement officers and carry weapons on campus. The House is slated to consider the measure — among others, including a bump stock ban and raising the age to buy a gun to 21 — Wednesday afternoon.